After a relaxing day, we decided we were up for an adventure on Wednesday.  We went back to Leeds and it was much easier this time around, thanks to Anna.  Caroline was her buddy all day!  We first visited Leeds Parish Church.  It was a beautiful church with the most amazing needlepoint cushions and kneelers.  I included a picture of the hydrangea cushion below.  It was interesting to me that some of the needlepoint cushions were actually advertisements for schools, tailors, The British Gas Company, and more.  I was very impressed by all the needlepoint cushions!
We ate lunch at a Thai restaurant.  I actually had a really good lunch even though I was very hesitant about eating here.  Caroline did not like the food and Tucker tried a little bit of everything and seemed to like it.  We have yet to find something he doesn't like.  The prawn crackers were a big hit.  You will probably notice a big scratch on his cheek.  That was courtesy of his loving sister.
We did a little shopping and made a stop at Starbucks and then headed back to Mirfield.  Chad had to go to Halifax that evening so we needed to be home sooner than later.  While he was gone Anna painted Caroline's fingernails for the first time.  Amazingly enough, she sat still!  Caroline even had her toenails painted.  The pale pink shimmer was the perfect shade for this little princess.  (Yes, I said princess.  She is very into princesses these days.  My fingers are crossed that it is only a phase!)  Painted nails was her reward for letting me cut her fingernails.  After the gash on Tucker's face, we decided that her nails had to be trimmed!! 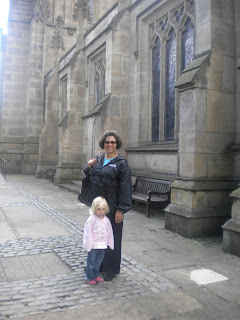 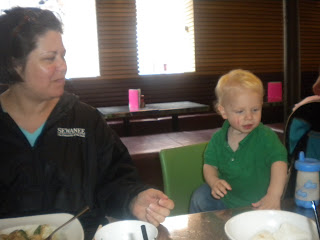 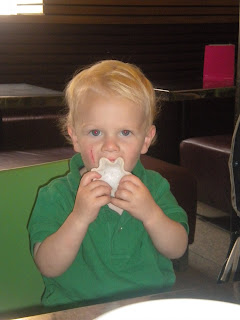 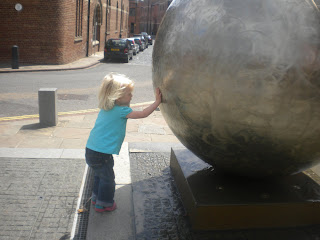 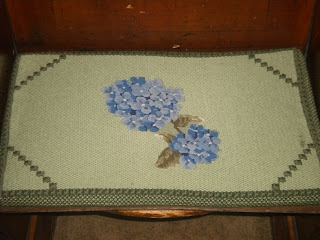