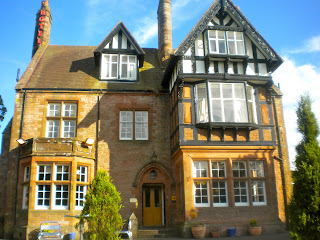 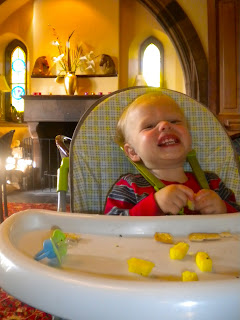 Tucker eating some "chips" at dinner. 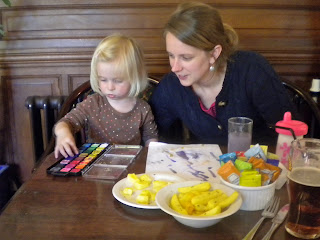 Caroline got paint instead of the usual crayons and was very excited about it. 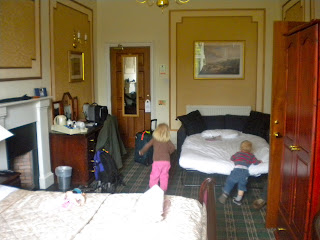 Our room before the kids destroyed it. 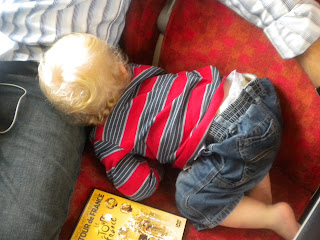 All along we had thought about spending a couple days in Scotland.  We procrastinated until we could not procrastinate anymore!  Tuesday morning we woke up and decided today was the day to go to Scotland.  We only had two more weeks here and things were getting booked up so it was now or never!  I have been to Scotland before, but Chad really wanted to go, the kids have never been and I was ready to get out of Mirfield for a few days.  We had been looking online at some rail/hotel deals so we knew right where to go to book our little vacation.
It was about a four hour train ride to Edinburgh.  Tucker slept most of the way and Caroline and I talked about the scenery, read books, sang songs, ate candy and just about anything else to keep her from waking Tucker up!  The view from the train was awesome.  The English countryside can't be beat.  The rolling hills and sheep were plentiful and just plain beautiful.  (Never thought I would say that about sheep!)  We knew our hotel was about ten miles outside of the city so we were prepared for a journey in the taxi.  It took about 45 minutes to get there and Caroline loved every moment of the taxi ride.  We even spent most of the ride singing a song about it...
"Taxi, taxi riding in the backseat,
Roll the window up, roll the window down.
Put some money in the slot,
See you later, thanks a lot.
Sure beats walking across town!"
(This was from one of her TV shows on Noggin.  We did not make it up.)
By the time we got to the Craigiebield Hotel, we were exhausted!  We checked in and decided we were staying in for the night.  There was a nice grassy area that the kids played in while we had a few drinks from the bar.  We had dinner at the hotel and then got ready for bed since we had a big day tomorrow!  Caroline slept on the pull out sofa (aka "big girl bed") and Tucker slept in the king bed with Chad and me.  Night, Night!
Posted by Caroline & Tucker at 6/18/2009 04:52:00 PM