We spent lots of time outside on this beautiful Saturday.  Around mid-morning, the four of us went across the street to the playground.  We had not been there in a while so the kids were super excited!  There were lots of other kids at the playground for Caroline to play with.  She did take Zoe just in case there were no other friends there.  We came home had lunch and Caroline and Tucker took naps.  Tucker woke up before Caroline and so I took him outside to walk around.  It was much easier having only one child to keep up with!  I think Tuck enjoyed being the one and only, too.
After dinner, we went outside for more play time.  This time Chad stayed behind to clean up.  We ended up visiting the chickens which is a good little walk from our flat.  Once we got there, I could smell something stinky and it wasn't the chickens this time...it was Tucker!  At about that time Caroline began to pee all over herself.  She does not like to have wet pants on so she stripped down to her "croc shoes" and shirt.  Then she realized that one of her shoes was wet and took it off.  Unfortunately, the pebbles hurt her feet so she couldn't walk and decided to fall down and cry instead.  I briefly thought about doing the same.
We were close enough to the flat for me to run Tucker to the flat so Chad could change him, along with Caroline's wet pants.  I ran back to get her because I wasn't sure how well a semi-naked, screaming 2 year old with one shoe on would go over with the monks.  At this point I decided it was time to call it a night.  We had had enough fun for one day!
This is what it looks like at 9:45 PM!  It does not get completely dark until 10:30 which makes it very difficult to get the kids (well at least one of them) to bed. 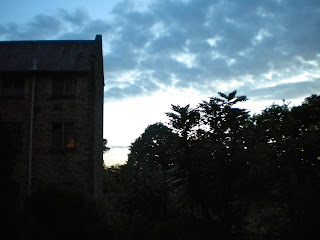 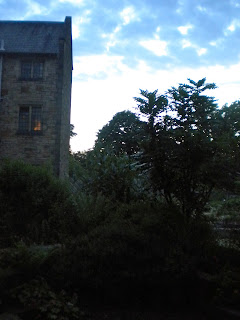 Mary, you deserve a reward. The picture you described with Caroline in the garden, half naked, one shoe off and crying is hilarious - good grief!!! I hope those moments will not be the only memories you have from England (and lack of a dryer)....they do make for good party stories though!!!!! Take care!! Lisa

Our Side of the Mountain said...

Oh my. The moments of mommyhood! I know it was not funny at the time, but I was cracking up picturing Caroline lying half-naked and crying in a monastery!