Sunday means church for Chad and survival for the rest of us until he gets home.  I decided to be brave today and take the kids on the bus to the grocery store by myself.  We need just a few more things to get us to Tuesday when we leave.  I also thought this would kill some time and make the morning go by faster.  Tucker was in the single stroller and Caroline walked and was a very good listener.  You never know when she may decide to stop listening and do her own thing!
As we got on the bus I gave the bus driver my money.  In return I got a rude response inquiring as to why I did not have anything smaller.  Last time I checked, there was not a sign saying that 20 pound bills were not accepted.  I just kept thinking, "3 more days, 3 more days..."  Of course the kids were thrilled to be riding on a bus even if it was just a short ride.  We made it to the Co-op, got a few items (most importantly more diapers!) and walked back to the bus stop to come home.  On the way a man and woman stopped me and asked me for directions.  Once I began to speak they realized that I was not speaking with the same accent as they did.  This meant they stopped listening and moved on immediately once I stopped talking.  Believe it or not I did actually know the answer to their question...too bad they didn't listen!
When we got back on the bus, I thought about my previous encounter.  I recalled that this was not the first time I had been asked directions.  In fact, I have been asked directions 3 or 4 times on this trip.  What is it about me that make people think I know where I am?!?!  I feel like most days since we have been here I have been lucky to know what country we were in!
Here  is a picture of Caroline "sharing" her apple with Tucker.  She will not let him hold it by himself so he has to take a bite while she holds it.  At least she's sharing... 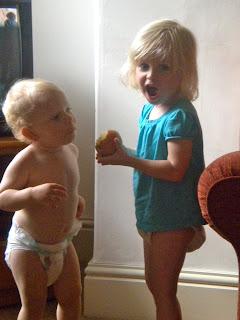