Friday was a busy day!  Chad had a meeting with the Mayor of Halifax and the kids and I decided to tag along.  Rather than having tea with the Mayor, we went to Eureka, a wonderful museum for kids.  It really was a neat place!  I think the Marks & Spencer (kid sized) grocery store was the favorite.  The kids has carts to push around and I would tell Caroline what I needed and she would put it in her cart.  Tucker really liked working the cash register because of the beeps and buttons.
I think we may have gone through the museum in record time because the kids kept seeing more things to explore and would run ahead.  It was a lot of work chasing two little ones that always go in the opposite direction!  I could tell by the smiles on their faces that it was well worth it.  They loved it!  We had a quick lunch at the cafe and then went outside to play in the giant sandbox.  This may be as close as we get to the beach for a little while longer.  After much coercing, I finally got Caroline out of the sandbox and down the street so we could meet up with Chad.  He said he had a great meeting and got some pictures.  Again, he needed the camera so no pictures from the museum.  Now that I think about it, I am not sure I would have been able to take any pictures...I had my hands full!
Caroline slept on the bus during the 45 minute ride home.  We hoped that Tucker might take a nap once we got home but that did not happen.  We were getting hungry and cranky (the adults, not the kids) and we needed to eat.  The ham sandwich I had at lunch was not going to hold me much longer.  So the adventure begins.
Within walking distance from our flat, there is a pub with an outside play area.  I thought this would be perfect.  The weather was nice so we could sit outside and eat while the kids played on the slide and swings.  It was also fenced in so we would not have to chase kids. Unfortunately, they do not serve food, just drinks.  Caroline and Tucker had already seen the slide so we had to stay and let them play for a little bit.  Chad and I had a drink while the kids played.  The pictures below are of them playing at The Wasp's Nest.  I must say, it is quite a nice feature to have a play area for the kids at the pubs.  It does make life easier.  Attempt #1, failed.
There was a bus stop right outside the pub so we hopped on the bus and went into the town of Mirfield, where there was another pub.  We have walked by it many times and noticed signs that say they serve food.  I went in to see about getting a menu and the lady told me that they only serve food on Sundays.  Attempt #2, failed.
Thankfully, we were right next to a bus stop so Chad and I decided to go to Huddersfield.  We knew we wouldn't have any trouble finding a place where we could get dinner there.  Also, we had an all day bus pass so the trip did not cost us any extra.  The first place we saw that served food was going to be where we had dinner.  We were really hungry!  Of course, McDonald's was the first place we happened upon, so we changed the rule to the second place.  Caroline saw the McDonald's, too and kept saying "Try House" over and over.
Finally a pub with a menu in the window.  This was very exciting!  Guess what?!?!  They did not serve dinner either!  Attempt #3, failed.  I am not going to repeat what Chad and I were thinking at this point.  It was looking like McDonald's was going to be dinner.  Just across the street from McDonald's was a real restaurant that served food.  We only knew this because we could see people eating in the window.  Thank you God!  I went to get Caroline some "tries" to keep her happy while we ordered our food.  Turns out, this was a Portuguese restaurant and it was very good!  Again I say, thank you God! 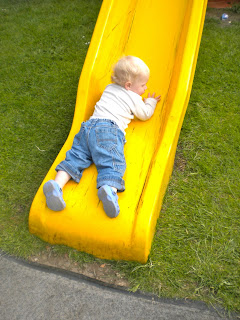 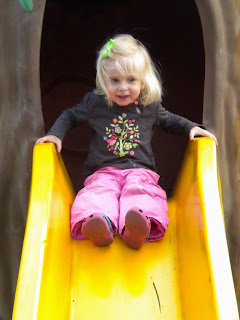 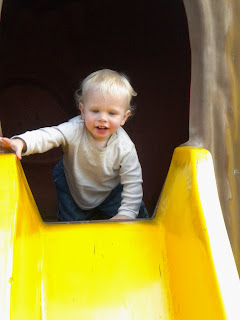 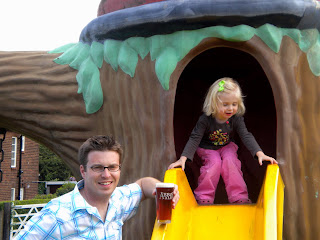