Today we went back to Dewsbury.  This time we remembered the camera!  We went to Dewsbury Minster to look around and take some pictures.  It was very unassuming from the outside, so we were quite surprised when we entered.  We were greeted and shown around by Sue.  She gave us a brief history and showed us a couple things not to miss.  Sue was very welcoming and really took the time to get to know us.  We were sorry to tell her that we would not be able to attend a service there because Chad was already committed to Halifax!
The church has a small refectory with about eleven tables.  It looked like a good place to eat so we gave it a try.  The kids could not have been better at lunch!  Chad and I are still trying to figure out what was different about today's meal.  They must have just been really hungry!  Chad got yorkshire pudding filled with beef stew.  I was reluctant to try it, but I am glad that I did.  It really tasted like pot roast and it was yummy!  Caroline and Tucker had an orange, toast and a grilled ham and cheese sandwich.
From there we made a quick stop at the ASDA to get some groceries and then back across the street to the bus station.  At the bus station we decided that Chad would go home and put Tucker down for a nap and put the groceries away, while Caroline and I got off in the town of Mirfield and went to the store there to get more blueberries.  Because there was a wheelchair already on the bus, the driver told Chad he had to fold the pram.  This was not possible with a sleepy child in the stroller and a bag of groceries.  Therefore, Caroline and I went ahead and got on the bus, while Chad waited about ten minutes for the next bus.
Well, about ten minutes into our ride, I knew we were going the wrong way!  I had a feeling shortly after we pulled away from the station, but knew for certain when I started to recognize buildings we saw on our way to Leeds.  Wrong bus!!!  Another elderly Pakistanian man was getting off and asked the driver where this bus was going.  I overheard the conversation and yanked Caroline from her seat and jumped off the bus.  So imagine this gentleman, Caroline and me on the side of the road trying to figure out which bus we needed.  He was trying to be helpful but I could hardly understand a word of what he was saying.  We got on the next bus and went back to the bus station and started over.  This time we got on the correct bus and headed to Mirfield.
It was funny because I asked Caroline where we were going, expecting her to say "to get blueberries."  Instead she said, "We're going to Mirfield."  She has never said that before...I guess she has just heard it so many times.  We did get four containers of blueberries because they were such a good price and we love them.  Caroline and I also did a little shopping at the three local charity shops.  We got her a bracelet, a shirt and a play camera and Tucker a Thomas book.  I got a set of knitting needles and we got Chad a frying pan, pint glass and a small print of York Minster.  I think we paid less than $10 for these items.  It turned out to be a fun day minus the extra bus ride! 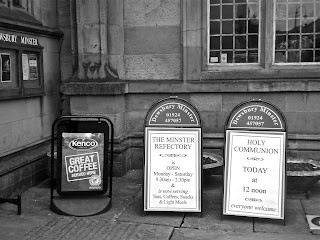 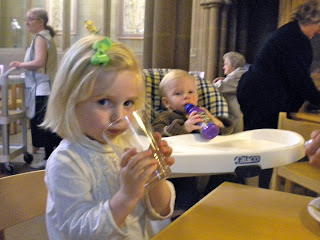 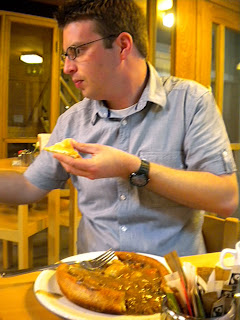 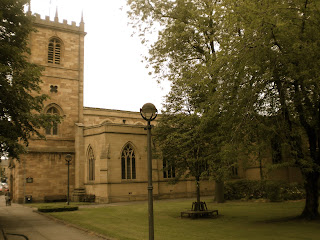 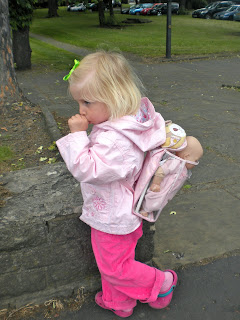