After school on Friday, all Caroline could talk about was the "pepper ally" that they had at school. Her class got to walk over to the "big kid" gym and watch the cheerleaders and see the football boys. I asked her how she liked the cheerleaders and she enthusiastically said "Mom, there were these two cheerleaders and then they put a girl on top and threw her into the air!" Amazingly enough, I was able to convince Caroline to participate in school spirit day and wear red like her teacher had asked.
I decided that I would take the kids to the football game that evening at 7 pm. Caroline was so excited and Tucker was ready to see the football boys. This was the first football game that either of them had been to. I practically had to hold Caroline and Tucker back from running up to the gates. Once we entered Tucker immediately saw one of his buddies from his school. He and Griffin played and played and played!
The kids were treated to popcorn and M & M's while they watched the game. As we sat on the bleachers Caroline would say "Mom, there's Mrs. Johnson, there's Mrs. Tyree, there's Ashley" and on and on. I bet she recognized at least a dozen people. Pretty good for a little girl that has only been at school for two weeks! Once they were finished with their snacks, Caroline decided that she couldn't live without a red and black pom pom that the cheerleaders were selling. So, at halftime we found some cheerleaders and got two pom poms.
Tucker continued to play with his buddy and Caroline watched every move that the cheerleaders made. At one point I caught her with her hands up in the air imitating the cheerleaders. Fuqua won the game by 30+ points. After the game the kids ran to the field and pretended to be football players. Tuck and Griffin chased each other and even snuck in a few "tackles." I could just envision them in 12 years or so actually playing on that same field. (Although, I am still not sure if I will let Tucker play football or not...I don't want my little boy to be tackled! Too bad, I won't have a say in the matter...) We really enjoyed our little outing. The kids had fun and lasted through the entire game. I think we'll try it again next time there is a home game...Go Falcons!
Posted by Caroline & Tucker at 8/29/2010 07:29:00 PM No comments:

We are back in Farmville! Caroline and Tucker have successfully completed their first week of school. Caroline is in a 3 and 4 year old Pre-K program and loving every minute! Although she didn't have to be at school until 8:30 on Monday morning, she was up at 7:15, dressed and ready to go! I asked her to come sit down and have breakfast and she said "No Mom, I have to go to school." Thankfully she had plenty of time to spare. Once we got to the school and out of the car, she looked around and said "Mom there are big kids here!" (This means 4th and 5th graders.) Chad, Tucker and I walked her to her classroom and she didn't look back. In fact, she saw so many fun, new things to play with that when we tried to hug and kiss her goodbye she gave us each about 2 seconds and then she was off! I think Chad and I were a little teary eyed, but there was no doubt that she was in the right place!
I picked her up around 4 and she could not stop talking. She only knew a few names but identified everyone by what they were wearing..."the boy in the blue shirt; the girl in the pink dress; the Henry with black hair." I am not sure I have seen this little girl more full of joy! The downside of her excitement was that she was up until almost 10 pm talking about her day. She gave me every detail! Later in the week I talked to her teacher and Mrs. Frank said that "Caroline talks a lot (but it is cute!)" and that Caroline is not gonna let her get away with anything! Yep, that's my Caroline! Caroline had a hard time getting up and going to school on Tuesday morning because she was exhausted...that, and suddenly overnight she decided that school was "yucky." Interesting considering she had another great day on Tuesday. Her only complaints so far have been- 1) the music teacher told her that she had white hair, and that was upsetting because we all know her hair is yellow! 2) "Why won't my teacher every let me have ice cream after lunch?!?!" Well, little does she know that Mommy informed her teacher that Caroline does not need ice cream everyday after lunch. (I have decided that I will let her have ice cream on Fridays as a special treat.)
And for Tucker...He loves his "bit boy school" too! On Monday we took him to school after we dropped Caroline off. He was a little pouty and when I asked him if he was sad to leave Caroline he said "yes." Once we got to his new classroom, he was just fine. He seemed a little more hesitant than his sister, but his teacher said he had a great day. He played with construction, ate all of his lunch and went down for a nap easily and slept for 2 hours. Sounds like a good day to me! On Tuesday, I began working at Tucker's pre-school. I am now the lead teacher in his class and have 8 two year old kids to keep up with. It is fun for me to see Tucker on his own and not following behind or being bossed around by big sister. He is great at cleaning up! He is the oldest in his class by a few months. Tucker has learned well from Caroline and acts like he has 7 younger siblings when at school. He is caring, thoughtful and does a great job using his words when there is a confrontation.
I am so, so proud of my two little ones! They have had a lot of change in the past few months, but have handled it like champs. It is so great to see them so joyful and genuinely happy with their new home and new schools. I think I'll keep'em!!! 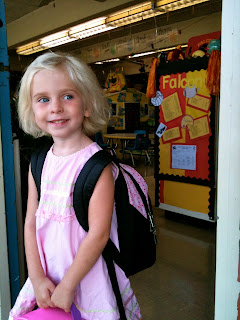 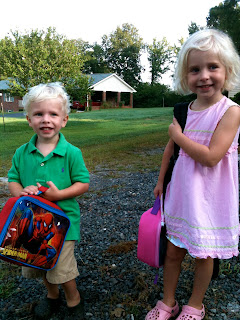 July in a Nutshell

Below are some pictures of how we spent July. We enjoyed going to the beach and riding on the boat. Every Thursday we went to the library for the kids' story time and craft project. We picked blueberries...a lot of blueberries. Tucker ate most of the blueberries he picked right off the bush. We went to the Yellow Duck Bakery and tried new muffins such as zucchini apricot. Yum! A couple of times we went to the Corner Bakery and got some donuts for breakfast...not so healthy, but a fun treat for the kids!
I think Caroline was tired of blowing bubbles... 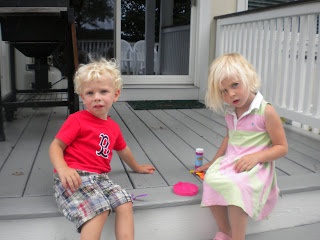 Caroline and Tucker spent much of the summer riding their "big bikes." I created a town from sidewalk chalk that even included COTA, as Tucker said. 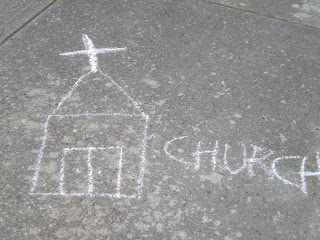 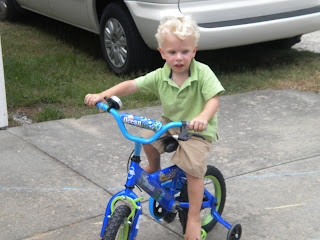 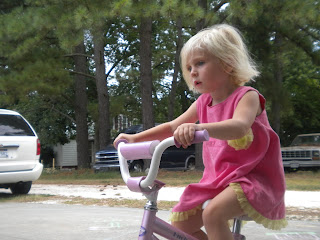 Did you know that sidewalk chalk + water = "paint?" 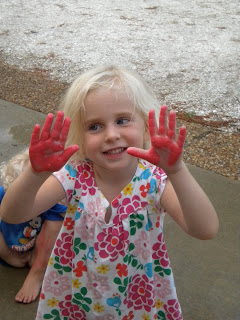 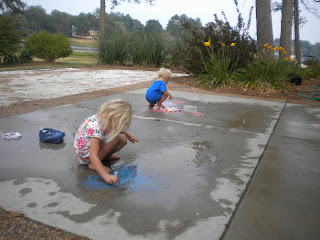