Today Tucker had a Mother's Day Tea at his school. He gave a me a planted flower in a pot that he decorated and a sweet card decorated with his fingerprints. We snacked on grapes, strawberries, and cookies of course. He was having a great time until he realized that once he finished eating with me he could go outside and play on the playground. Thankfully he posed for a picture before he had to go...definitely the sweetest boy around! 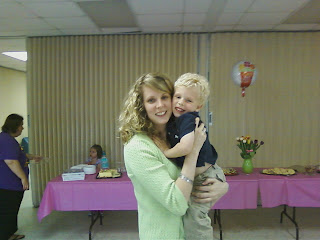 Caroline had a big day at school, too. It was Friends and Family Day and the kids performed in the Lower School Spring "Concert." Caroline's class sang about 5 songs. They did so well! Caroline was literally front and center and extremely focused. She kept her eyes on her music teacher and did every move exactly as she was supposed to. Finally, towards the end she smiled and had some fun. It was very cute and I was so proud of Caroline! She is the best little girl ever! (She is on the front row, third child from the left in the patchwork dress) 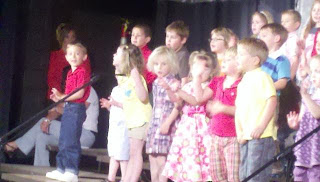 Tucker hasn't been the easiest child since he turned 3 a few months ago. I guess this is what people say about "the terrible 2's." I must have been spoiled because the 2's weren't so bad for Tucker...he was super sweet and loving! Maybe he just feels like a big boy now and challenges Caroline (and me) on everything. Here is a quick story of an situation that just occured.

I am sitting in the chair watching Tucker and Caroline watch a new Curious George. Tucker comes over and sits in my lap, gives me a sweet kiss and says "I'm gonna marry you Mommy." I said "what did you say Tuck?" He replied with excitement in his voice, "I'm gonna marry you Mommy!" I give him a kiss and snuggle with him as long as he will let me hold him. All the while, I am loving this moment and thinking about how he used to do things like this all the time...well, at least sit in my lap and snuggle. About two minutes later he gets fidgety and kicks me. I told him not to do it again. Sure enough, he does it again. So, I popped him on the foot. He cries (mostly fake and only because he was shocked that I did it) and runs to Caroline saying "Mommy hit me" and pulling the pity card. She buys it, hugs him and says "come here sweet boy" in the most pitiful voice you can imagine. The she says "I'm sorry Tucker. Sometimes Mommies and Daddies have to do that." This of course in the most rational, adult voice you can imagine.

This occurred in about a three minute span...imagine how many more of these little scenarios happen throughout our day...and you wonder why the blog isn't updated more often.
Posted by Caroline & Tucker at 3/15/2011 06:50:00 PM 2 comments: 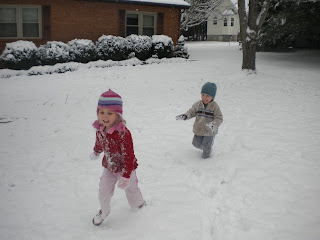 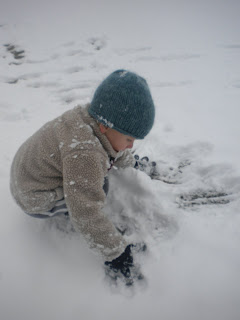 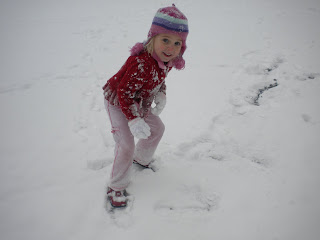 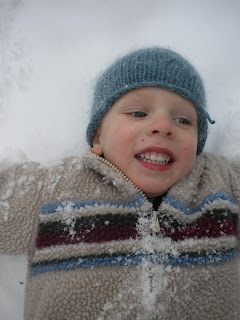 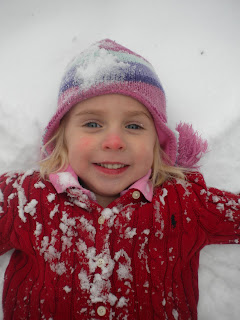 Tucker and Caroline had a very Merry Christmas! Santa brought lots of fun things. Caroline got the Candy Land 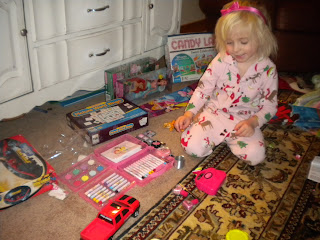 game, art supplies, Barbies, makeup and much more. Tucker got a Spiderman fishing pole, Ironman mask, trucks, trains and his favorite a Speed Racer Mach 5! They seemed to really understand this year about Santa. They went to bed well because they knew Santa was watching them and first thing the next morning they checked to see if Santa had eaten the cookies we left out. They were so cute on Christmas morning showing each other what they got. I love to see them so full of joy! 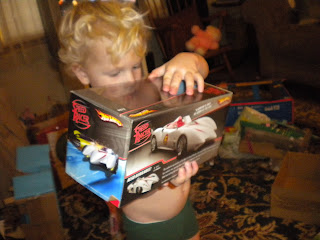 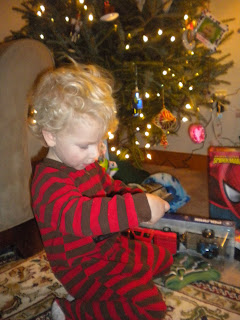 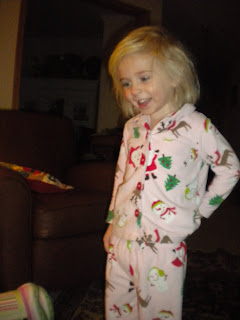 This is what happens when Tucker is left unattended for just a few minutes! He got into my makeup, specifically my mascara and smeared it all over his face. He also put mascara and lipstick all over my mirror...I was not very happy with him! 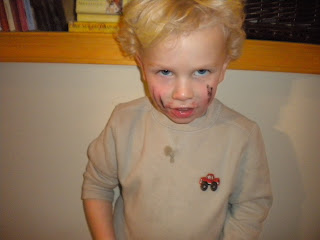 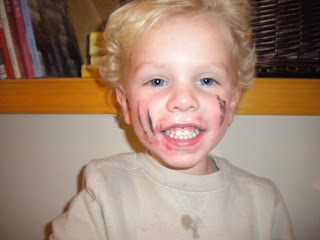 Caroline has been found several times now in my closet trying on my shoes. So far, the black boots are her favorite. She tried to convince me to let her wear them to school today because they are so "fashiony." I wasn't so sure black heel boots would go over too well in Pre-K, or in any grade for that matter. She then told me that the boots were "so romantic." I'm not sure where she heard that word or what exactly she thinks it means. Once Tucker saw her in boots he also had to find a pair of shoes to put on. I'm not sure if he picked out my tennis shoes or if he was assigned them by Caroline. Anyway, here are a couple pictures of Sassy Pants and Spiderman. 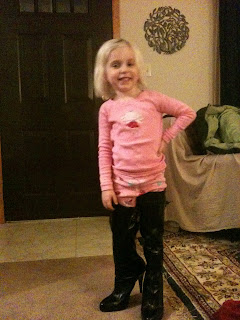 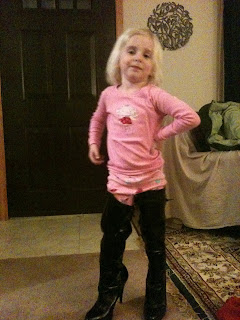 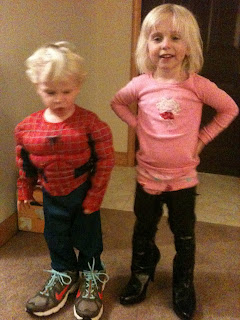 Tucker is still obsessed with Spiderman. The other day he put the Spiderman mask on and came running into Caroline's room. We were sitting on the floor playing and he jumped into my lap. I screamed and pretended to be scared and he said "Don't worry Mom, it's me Peter Parker" as he took off the mask. If you don't know, Peter Parker is the boy's name who then becomes Spiderman. So even when he is not Spiderman he still has to be Peter Parker. What's wrong with just being a sweet little boy sometimes?!?!
Posted by Caroline & Tucker at 11/10/2010 06:12:00 PM No comments:

Me: Caroline, do you like my new sweater?
Caroline: Yes and it looks great with your hair....and your earrings and your shoes and your shirt....you look like a princess!
***I think she was being extra nice because she was trying to convince me to play the polka dot game (aka Twister) with her tonight.
Posted by Caroline & Tucker at 11/10/2010 06:09:00 PM 10 comments:

Last night we went to Trunk-or-Treat at Tucker's school. It was a huge event as it was open to the community. I had no idea it was going to be so big! Tucker saw the bounce house as we pulled up and said "Mom, is that my school?!?!?!" He was so excited! It was fun and well planned. There was a separate area for younger kids which was great since there were so many "older" kids there. Caroline and Tucker played some games, won some prizes and had a blast in the bounce house!
In the parking lot, church members set up trick-or-treating stations for the kids. When we first got there around 6pm, the line for the candy was ridiculously long. There was no way we were going to make the kids stand in line just to get free candy. By the time we were ready to leave around 7:30 there was no line...it was perfect! The kids got a little bit of candy and were happy!
This has been a fun Halloween weekend for the kids. They really got into it this year and said "trick-or-treat" without prompting and we even heard a few "thank yous." Although it was a little easier this year, I still miss the days at Sewanee when we could go around with all our friends. We knew everyone's house that we went to for candy. Trick-or-treating in the Woodlands was the best. My favorite part was dinner at the Carson's house and sitting by the fire pit outside while the kids sorted through and ate their candy. I knew I'd miss it, and I do. 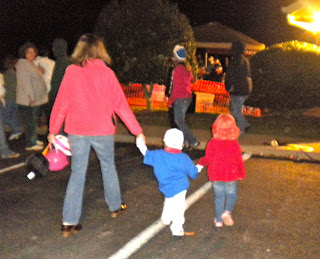 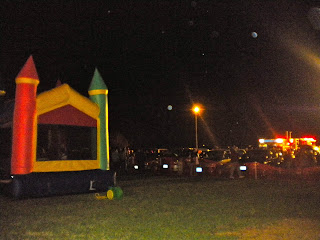 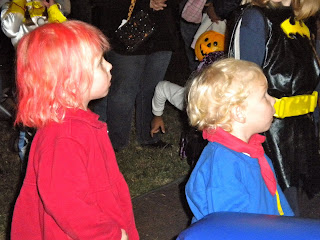 Caroline and Tucker waited patiently in line for the slide and fun house. 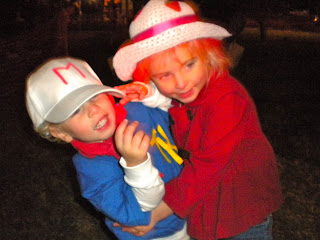 Speed Racer and Strawberry Shortcake trying to hug for a picture. 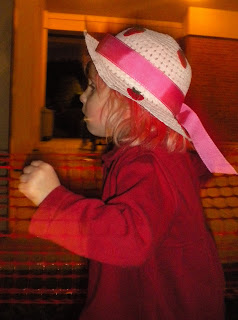 Caroline hopped over 3 pumpkins for a prize! 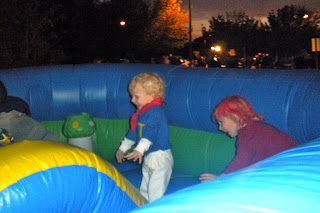 Tucker and Caroline in the bounce area for the younger kids. 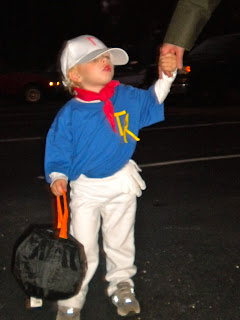 On Saturday the kiddos went with Daddy to the Hampden-Sydney football game. But, before they could go, Caroline had to put on her new cheerleader outfit. She was so excited!!! It was a chilly day so we insisted that she wear a shirt and pants under the outfit. She complied, but was not happy about it. She also had a pink H-SC hat. Tucker got a new H-SC t-shirt and hat. The t-shirt got dirty seconds after putting it on so Tuck proudly wore his new hat. When the kids got tired of the football game, they made a trip to see the fire truck. Lucky for them, they were allowed to sit in the truck and also try on the helmet! Now that's a good day! 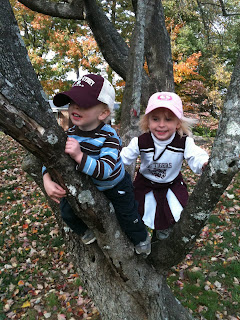 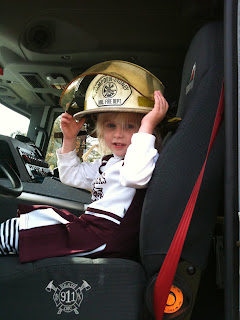 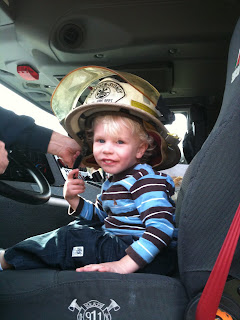