Today was our first real adventure.  We took the double decker bus to Huddersfield, a town/city about 20 minutes away.  Thankfully this was a very successful trip!  The bus stop is just seconds from our front door.  Caroline was extremely excited about getting to ride the bus.  She kept asking Tucker, "Ready get on school bus, Buddy?"  Several buses passed us because they did not stop at our stop.  Caroline even began to cry when the buses didn't stop for us.
We had waited about 10 minutes and guess who had to go pee pee?  So, Chad took Caroline back in the flat and Tucker and I stood near the bus stop just to see when (and if) it would come.  Sure enough, the bus came 2 seconds after Caroline and Chad left!  Finally another bus came and we boarded.  We went to the top and sat right up front.  We had the best view possible.  Tucker fell asleep, but Caroline was wired!  She loved it and pointed out every little thing she saw.  Remember, we were on the top deck and we really could see everything!
I had to pull Caroline off the bus because she did not want to get off.  From the second we got off the bus, she asked over and over "where our bus go mama?  I need get on bus!"  We went to an open air market that was really neat.  We ended up getting an umbrella stroller for Tuck.  The double stroller really isn't conducive for bus travel.  We also went to Tesco, which is comparable to Wal-Mart.  I am not a fan of Wal-Mart and I generally try to avoid it at all costs.  However, we needed a variety of things and figured a Wal-Mart type store is where we needed to be.  For the first time since we have been here I felt like we were back in the States.  The beeps at the registers sound exactly like the Wal-Mart beeps-incredibly annoying!   We got what we needed, shoved it in the backpack (yes, we paid for it first!) and headed back to the market.
There were lots of vendors with toys, so we told Caroline she could pick out something.  Tucker was asleep and didn't have a clue what was going on.  She picked out 3 matchbox cars and a Thomas the Train engine.  She was very happy!  From there we went to the fish and chips store and had lunch.  Caroline refused to even try the chips, even though they looked very much like french fries.  Tucker woke up for lunch and rather enjoyed the fish and chips.
We explored a little more and then decided it was time to head home for naps.  That, and we were quite TIRED of hearing Caroline tell us that she was ready to get on our bus!  Seriously, I think she may have said that 25+ times.  So to the bus stop we went.  Tucker and Chad stayed on the lower deck of the bus since Tucker was in the stroller and wasn't really impressed by the view from the top deck.  Caroline knew just where to go!  It is too bad the ride was only 20 minutes.  I think Caroline could have stayed on forever!  When it was almost time for us to get off the bus, Caroline looked at me and sweetly said "Thanks for getting on the bus, Mama.  This is fun."  Needless to say, that made up for all the "nagging" she was doing earlier. 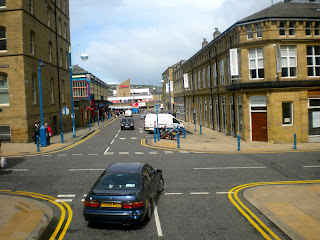 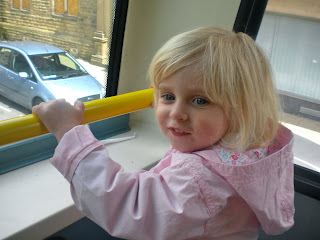 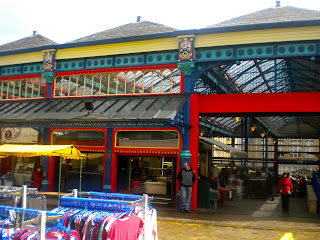 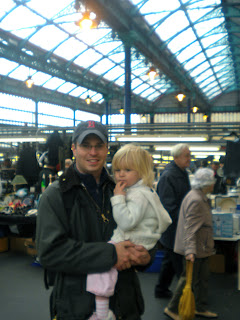 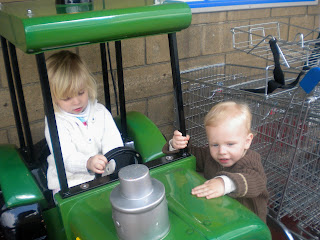 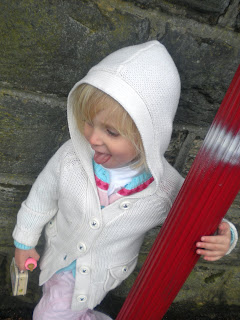 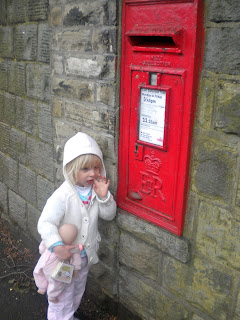 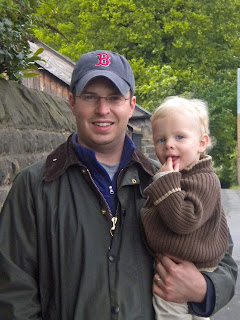